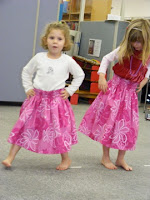 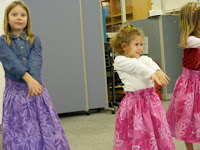 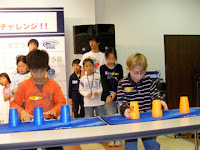 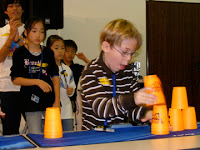 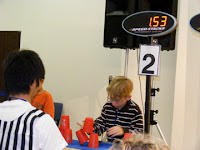 It has been long in coming, but here it is: my report on speed stacking!  I have to say, the whole thing was unbelievable.  It was a relatively small event: only 60 or so stackers.  There was a huge range of ages - from five to sixty-five, but most were kids under 20 or so.  The room was pretty large - on the ground floor of the Tokyo Tower (read: copy of Eiffel Tower...) with about 20 tables set up on the side for practice.  The sound was deafening - plastic on plastic on tables for about 40 people.
The head of speed stack Japan, John Fox, welcomed everyone.  There was continuous translations between English and Japanese for all speakers.  He also explained all the rules.  And the list of rules in enormous!  There are different fouls depending if the cups fall and how they fall.  If the stacker fails to touch the timer with both hands, it's a timer foul.  There are different types of fumbles depending on if a cup falls on another cup or on the official mat.  A cup falling over is a different fumble from a cup being knocked by an elbow.  The list goes on and on...  You think baseball is complex? Ha!
There are three official ways to stack - 3/3/3, 3/6/3 and the cycle.  The first involves three pyramids of three cups each - stack 'em up and stack 'em down.  The second involves the same thing except with 6 in the middle, and the cycle is the hardest and the most interesting.  There is a precise sequence to the way the cups have to go up, down, touch on the sides, and then go up and down a final time.  The stackers lined up to go before judges who gave them two practice runs before timing them three times, and keeping the lowest time as the official time. It was long.
Bailey did excellently.  He is not a pro, but he handles himself like one.  The neat part about the judging is that most of them use it as a teachable moment.  If the child makes a mistake, the judges actually pointed out where the child went wrong and how to fix it for next time.  Bailey listened intently and his teacher from school (who was present in an official capacity - judging and emcee-ing) was pleased with his performance.
While the judges tally times before final rounds, for entertainment, the stackers do relays.  They break the stackers into six teams and pick a cycle.  Then the first person in the line starts the clock.  When he finishes his stack, he runs back to the line and tags the next person, who runs to the table, does his cycle, then finishes, and runs to the line to tag the next person.  The timer stays on the whole time until the last guy in line shuts it off.  The team with the lowest combined time wins.  Bailey's team didn't even win one race! That's okay - they were happy and having a ball!!!
Bailey got into the finals for the 3/3/3 but didn't make it past the first round.  Overall he was pleased with his performance for his first speed-stack tournament.  Marc brought Bailey over there at 12:30pm, and I left with him at 4:30.  It wasn' t done yet either.  There were still exhibition stacks by world record holders to happen at 5:30.  I just didn't want to wait around any longer.  Long day.
It really was interesting overall.  I swear it looks a bit like a magic trick when done that quickly.  The stackers need incredible eye-hand coordination and for the faster, older kids, it appears that they have no hands because they're moving in a blur.  Looking forward to next time.
Now, compare that to last Friday when Bailey ran 3 kilometers at a cross-country meet for International Schools where he came in fifth among all third graders.  It was much more physically demanding, but there was less coordination involved.  Any way you put it, Bailey is an incredible athlete.
Oh, don't forget the little miss: today was her last hula class.  She knows a few Hawaiian words and dances beautifully.  Photos for that attached too.
Hope you are well!!  Love from us all to you for the holiday season.
Posted by Aimee Weinstein at 9:44 PM

I can't believe this - we saw cup speed stacking on espn one day at a bar!