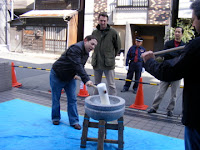 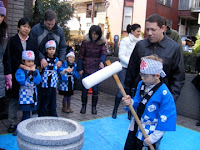 Yesterday the kids had Omochi pounding at their school!  Omochi is a traditional Japanese treat for welcoming in the New Year - and we did it to celebrate the Chinese New Year, not the secular one.  Aren't we multicultural?? 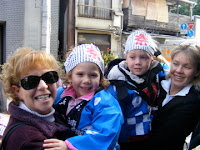 Omochi are sweet, sticky rice balls.  Rice is pounded by huge mallets in a ceramic bowl until it is extra-sticky, then balled and rolled into various toppings before being eaten.  Anyway, the event was under the purveyance of the parents' group - and specifically the Japanese parents who knew how to do all this.  They did it purposefully on a Japanese holiday so the dads could be there, too. 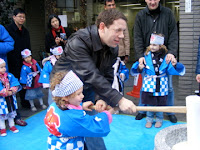 Each class got 30 minutes to complete the event.  First they put all the kids in traditional Hapi Coats and headbands.  Then each kid got a turn taking the long-handled hammer and pounding it into the hot rice. Think about it: SANCTIONED SMACKING!!!  Each time the kid hit the rice, the traditional shout of YOOISHO rose through the crowd.  Cheering and chanting abounded! The kids just loved it.  And according to the principal, we had just about 100% parental participation.  What a community! 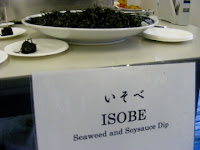 The bowl with the pounded rice was then ferried upstairs to the big multipurpose rooms where Japanese moms stood at the ready to roll the balls and dip them into sauces.  There were three different ones: brown sugar, soy sauce and seaweed, and sweet azuki beans.  After the pounding the entire class trouped  upstairs for tasting. Each kid tried each one and there was so much that they could come back for seconds!
The parents were so great - they had prepared everything perfectly and stayed ahead of the pounding so that there were always plenty of omochi ready for the next class. As you can see above, Marc helped with a good deal of pounding himself.
The most interesting part of the whole thing was the coming together as an international community.  In addition to the Japanese contingent, there were Indian kids, French kids, American kids, Armenian kids, Korean kids - and the list goes on... All of those children and their families were uniting to take part in an ancient Japanese tradition.  Enjoy the photos.

Posted by Aimee Weinstein at 2:16 PM