I don’t have pictures of this yet, but I will get them: we went to Hello Kitty Place in a mall here in Tokyo. This is one of those “only in Tokyo” experiences.

The kids had the day off from school last Monday and I wanted to do something fun and special for them. Bailey had a birthday party to go to (brave parents – 10 boys and fishing rods at a local pond – of course Bailey was the one who got the hook in his finger. Don’t worry – he’s fine) so he was busy. But Sydney needed a little distraction.

My friend Amy is Japanese-American and has a daughter in Syd’s class. Malia and Syd are really great friends. We also had another little girl from the class – a Finnish girl named Aura. All three are five years old and clearly spend a lot of time together in the classroom. It is so interesting to see this Asian, European and American trio interacting with their different accents. It does not stop them from talking a mile a minute! Amy suggested this mall, La-La Port. Just the name is a little odd-sounding, I thought. It turns out that the mall is geared toward mothers and children – stores, restaurants, everything with mothers and kids in mind.

Amy drove and it took about 30 minutes to get there – it’s in Odaiba, near where they have that replica of the Statue of Liberty. There were some American stores – The Gap, Lands End, Claire’s, but most were Japanese brands of jewelry, clothes and shoes.

Lunch was an interesting affair. The restaurant we went to had a big red chandelier made of poufy balloons. Everything else in the place, from the tables to the chairs to the floor, was pink. The omelet Sydney ordered was heart-shaped, as was the mound of rice of my curry-rice dish. There was squeaky, clappy music playing in the background. The girls loved it!

After lunch we went to the Hello Kitty playground. I could not believe this place! You pay by the hour per person and they just mark your in-time. It’s so easy to say that you’re only going to be there 30 minutes – and then you end up staying an hour. Again, the girls just loved it. They got to dress in frilly costumes, put on make-up, serve tea, participate in a live Hello Kitty show (given by a woman in a blue puffy dress with multiple crinolines, chunky heels and high squeaky voice – think of every stereotype you know of cutesy.) and then jump in a ball pit. For the parents – presumably moms – there are massage chairs and a coffee bar – all of which cost extra. The girls changed outfits three times, spent as long as we’d let them in the ball pit (which had the advantage of a big ship in the back of it) and put makeup all over their faces - literally. Luckily there were wipes for afterward. Amy and I bought a throw-away camera. As soon as I have it developed (remember that???) I’ll get the pix up on the blog.

Our final destination in the mall was a chocolate shoppe. Again with the cutesy! Malia had a teddy-bear shaped cake-let, while Aura and Sydney had mini-parfaits. I had a coffee in a teeny tiny pink cup and saucer.

By then the girls were tired and I don’t blame them. They were pretty quiet in the back of the car on the way home.

By the time Sydney and I got home, Bailey was there. His friend Kalani and he had gone to the park with Minnie after the party and Sora had just picked up Kalani before I arrived. So both kids were pretty whipped. Dinner was a small affair of pasta that night before an early bedtime.

All-in-all it was an excellent day off. I’m just proud of myself because in the midst of all that pink and cute, I didn’t throw up once. I just have this crazy feeling that that’s not the last time I’ll be there…
Posted by Aimee Weinstein at 2:34 PM 2 comments: 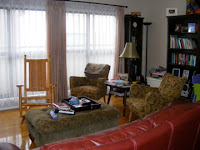 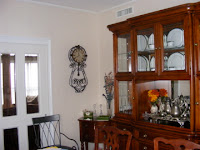 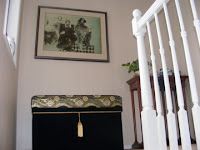 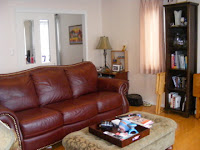 Here are a couple of photos from our house in Tokyo!
Posted by Aimee Weinstein at 6:07 PM 2 comments:

Back in the saddle (queue the music here...)

So we have now been back in Tokyo for a full week, and it feels so wonderful to be here. I am pleased to report that this is home. Our beds are here, the kids’ school is here, and we have come home to a wonderful life full of friends and laughter.
Coming into Narita last Monday was quite easy. The flight was fine – though the kids didn’t sleep much. They’re excellent travelers though; they really know how to handle the long flight. When we got to Narita, we used a luggage delivery service. With four suitcases and still needing to get into the city by train, it’s the best option and not overly expensive. We took one valise with us and left the others for delivery Tuesday morning. We proceeded to get on the train into Tokyo. When we arrived at Tokyo station, we stepped out into the city and it was already dark. The lights of the city twinkled brightly as if to welcome us. You can imagine our surprise, however, when we got into the taxi that took us home and found that the taxi rates had risen as of January 1st! Instead of starting at $6.50, they now start at $7. (Though if the dollar got stronger, that rate would effectively go down…)
Jet lag hasn’t been too bad. The kids slept through the first night and Sydney had a bit of an issue with two 4am wake-ups, but other than that we’re fine. And now, a week later, everyone is settled. The kids ran to school and practically dove into their classrooms on Tuesday morning. They were delighted to see their teachers and friends and get back into routine.
Speaking of routine, this week we’re back to our usual round of activities – ballet, hula, Japanese lessons, violin lessons, and soccer. Bailey is starting Aikido and basketball, too. That kid would take a million activities a week if I’d let him!!
Several people have asked for pix of the house, and I’ll get to that right away.

In the meantime, thanks for your care and support and I wish everyone a happy, healthy, and prosperous new year! I look forward to sharing our 2008 adventures with you!
Posted by Aimee Weinstein at 6:50 AM No comments: