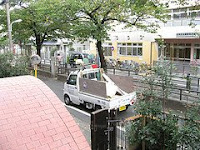 Japan has always been on the forefront of the "green" movement. According to my friend Sora, when she was a kid, a truck would come around and shout out "Chirigami Kokan!" Chirigami is a combination of two words: "Chiri," meaning trash, and "gami" - a variant for the word paper, "cami." Kokan means "swap."

When the truck came around, Sora and her mom and siblings would run around collecting all of the newspapers and magazines of the week - and in those days there was a lot of paper reading going on - perhaps two or more newspapers per household. They would bring all of it out to the truck and the driver would weigh it with a special scale attached in the bed of the truck. Then, based on the weight of the papers, the driver would exchange the paper for toilet paper.

This discussion came around because Sora, Jason, Marc and I were sitting in our living room and a truck was driving down the street with its driver screaming "saudake!" which Sora explained means "bamboo pole." Japanese use the pole to hang between two hooks on their balconies to dry laundry. There are trucks selling fresh tofu and grilled sweet potatoes. It's such an old fashioned yet personal way to do one's personal business.

This system is pretty much defunct now and there are more formal recycling venues, but the greening of a nation began years ago...
Posted by Aimee Weinstein at 6:05 PM 4 comments: 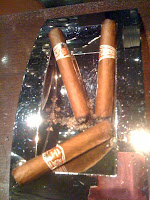 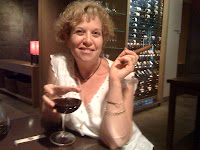 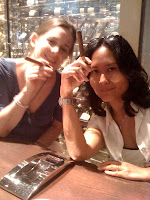 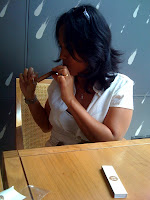 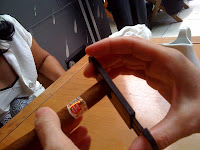 Today my friends Pravya and Nancy and I went to The Grand Hyatt in Roppongi Hills to experience a little decadence. We smoked cigars and drank red wine - at lunchtime. Nancy taught us to snip the end of the cigar, light it and draw on it to keep it lit. We puffed without inhaling. We enjoyed the looks from the Japanese men who were there for business lunches. And we laughed! What a life.
Posted by Aimee Weinstein at 5:03 PM 2 comments: 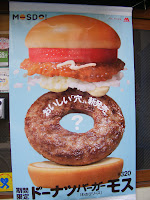 What do you get when you cross a hamburger with a donut?  See the results as advertised by Mr. Donut in Iidabashi, Tokyo!
Posted by Aimee Weinstein at 7:39 PM 2 comments:

My Favorite Place in Japan

My favorite place in Japan to visit is the Daibutsu Buddha in Kamakura; I could visit monthly and spend hours there and still never tire of it. Somehow its impressive and imposing position and serene countenance symbolize the peace that I look for inside of me. With most places, but especially here, I learn more and see something different every time I visit.

The Buddha is one of those common scenes - if you saw a picture of it, it would be something you would recognize as a symbol of Japan in general. It was built in 1252 and was originally enclosed in a temple, until a typhoon destroyed the temple. So since 1495 it has just been sitting in the open air with some surrounding areas for worship. The statue is 37 feet high. Just its eyebrow is over 4 feet long and the ear is over 6 feet. The area around it is tree-filled, and like Kamakura in general, the mountains are visible from at least three sides. Considering it resides in a small city, it is a true oasis. A few years ago when my friend, professor and mentor, Dulce, was visiting, she and I went and sat on a rock by the side of the statue and just stared up at it for what seemed like hours. By the time we stood to leave, it was after 5pm; the sun was beginning to set and the area was nearly silent so we didn’t need to talk. The serenity was palpable.

However, on that particular trip, as we got up, I happened to take one last look at the front of the statue – there were about ten or twelve people there, all of them staring upward, with one arm up, holding up their mobile phones to take a photo. It was absurd. Here was a figure from the 11th century, and people in the twenty-first century are flashing their mobile phones at it. Dulce and I sat down to recapture the mood and stayed until the guard kicked us out because the temple closed at 6pm. Tourists or not, no one was going to disturb our inner – and outer – sanctum.
Posted by Aimee Weinstein at 5:01 PM 1 comment:

Adventures of the Golfing Variety 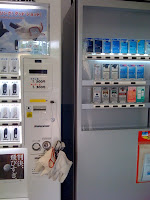 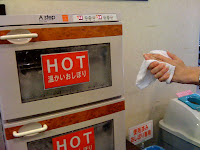 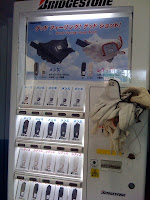 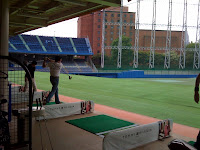 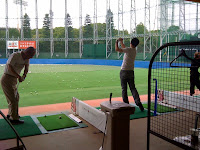 The golf driving range at Jingumae, in the heart of Tokyo is a combination of Western and Eastern that golf enthusiasts from across the globe can appreciate. Its location next to the National Stadium, where the Yakult Swallows play their home games make for easy access via the subway. Upon entering, there is a pro shop that sells every golf notion from packs of tees to the most expensive and professional of clubs. Right outside of the shop, at a small vending machine, guests purchase a rechargeable card in increments of 3000, 5000 or 10,000 JPY and then turn around to get a “box” from the desk. There are three floor options – for one price, you can be on the first, second or third floors of the building. Of course the first floor is the most expensive since it approximates course conditions the most realistically. You walk from the desk down a long hallway which is open on one side to face tee boxes and the open range, netted in carefully from about 300 meters away. Each tee box is separated with a half-wall that goes only half the length of the box as well. In each box is a chair and a hanger from which you can hang your coat. To get started, you put your card into the machine near the entry of the tee box. Instantly, right on the green in the front of the box, a tee with a ball on it pops up. There are more than forty tee boxes lined up along the wall of what used to be a second baseball stadium. You can tell what its prior use was from the stands of seats that still exist to the side of the boxes.
The idea is to set yourself up and take as many shots as you’d like. You pay by the ball and the machine automatically deducts from your declining balance card. Every time you hit one ball, another pops right up. It’s easy to forget how many balls you’ve already hit! Thankfully, the machine keeps track of each one.
There are, of course, the omnipresent vending machines of every drink under the sun, from milk to water to cups of various sodas and sports drinks. Near the entrance however is an interesting vending machine that sells golf gloves. There is a ring of them on the machine to try on so that you make the proper choice out of the machine. Of course, this interesting vending machine is situated strategically adjacent to the cigarette vending machine.
No trip to anywhere in Japan would be complete without oshibori, the hot washcloth. Right before you leave there is a cabinet full of them and you can use one free of charge to clean up before leaving. After the exertion of the swing, the towel is most welcome.
Posted by Aimee Weinstein at 2:59 PM No comments:

The other day Bailey had his violin lesson. The teacher often asks him to play with a cd for accompaniment, and this day was no exception. She asked him to first play the song by itself and he did a great job. She smiled and nodded and hit the play button on the cd player. Well, he screwed up the song completely. At the end of it, the teacher nicely said, "oh well, too bad, let's go on to the next one."

Bailey calmly looked at her and working very hard to control himself, practically whispered, "no, we'll do this one again."

There was something in his voice that said there was no arguing with him. I didn't intervene and the teacher, with raised eyebrows simply hit the play button on the cd player once again for the same song.

This time he played it perfectly.

I'm proud of him for his perseverence. I think that type of attitude: work hard until you get it right - will take him far in life. I just don't want him to be a little perfectionist or be too hard on himself. Would it have been better for him to have simply gone on to the next song? The teacher obviously knows that he can play that particular song very well. At what point do you have to say "oops" and simply move on? And how on earth do I explain that difference to my nine-year-old son?

When he was a baby and he would get hurt, I could kiss it and make it better and life was good. We have been learning of late that as Bailey grows, there are some hurts that even a mommy can't make better. This is hard work indeed. But I wouldn't trade it.
Posted by Aimee Weinstein at 1:38 PM 1 comment: 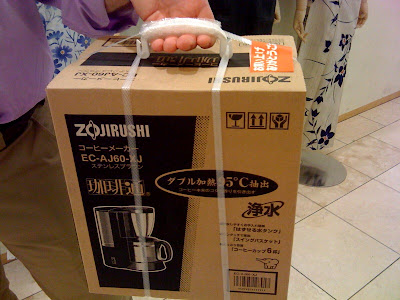 Marc and I bought a coffee maker today (our old one died a terrible death - I'm in mourning - don't ask). This is a small and cheap one as a stop-gap measure until we find one as perfect as the one we lost. At the store, a large electronics shop, we paid for the purchases and they insisted on "wrapping" the item. It turns out that wrapping meant packing it perfectly with rope and istalling a handle for easy carrying on the train home. This is typical of Japanese service. Love it!!
Posted by Aimee Weinstein at 5:14 PM 1 comment: