Today I am tired. I’ve been under a lot of stress vis a vis the Third Culture Kid Seminar, planning the Bali trip, Passover fast-approaching, (I’m doing it for the kids’ school too – 150 kids for a mock-seder) the JCC rabbi search and the charity essay contest on which I’m working. But the seminar today made so many relevant points that I want to mention a few of them so that perhaps the people around me will understand where I’m coming from.

The talk was by psychologist Elizabeth Gillies. She’s is a British woman who has been an expat in various countries for her whole adult life. She works with the local English-language counseling center and with international schools across Tokyo. Here are a few things that she pointed out:

The Art of Dining 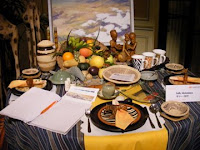 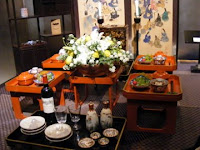 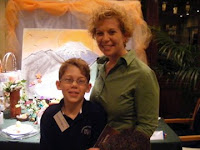 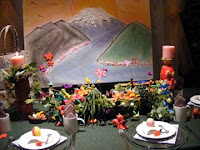 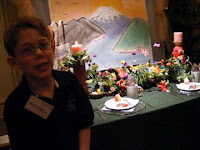 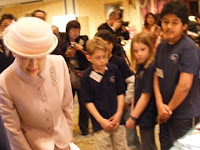 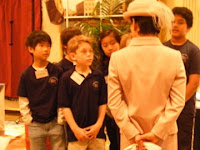 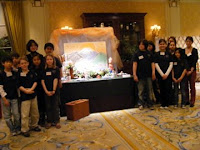 The Upper elementary class of the kids' school was the international school of choice this year by the charity Refugees International to participate in their fundraising event, the Art of Dining. The kids created a table setting and then showed it at the Westin Hotel Tokyo amid other tables by organizations, chefs and artists. The Japanese Emperor's sister-in-law, Princess Hitachi, was on hand to view the settings. She stopped and spoke with the children and shook their hands. Bailey was simply thrilled! Enjoy the photos of the kids, the Princess, and a few of the other tables.
Posted by Aimee Weinstein at 2:47 PM No comments: 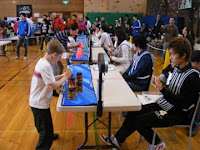 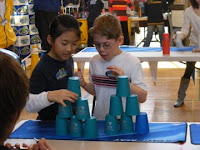 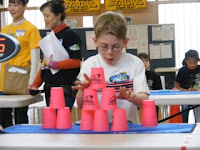 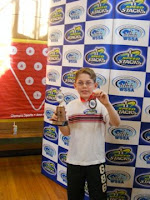 Sport Stacking is a great sport for eye-hand coordination, rhythm and other great skills. There are official stacks and times and "fouls" - rules and regulations. Bailey participated in an all-Japan tournament and did wonderfully - a medal and a trophy! He and his friend Shin-Won even did a doubles entry. Enjoy the attached photos.
Posted by Aimee Weinstein at 10:21 AM No comments:

Bailey and Sydney this winter 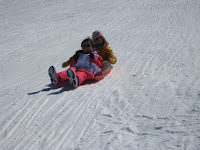 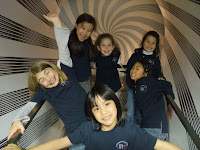 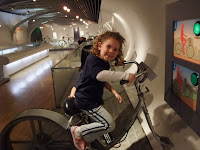 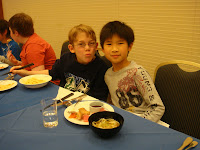 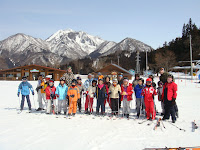 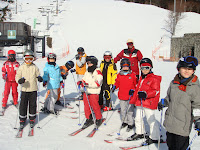 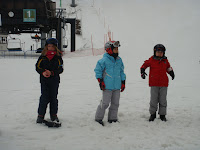 Here are a few great photos from Bailey's ski trip and Sydney's two class trips to the science museum and to the base of Mount Fuji for "fun in the snow day." In the pictures of Bailey, please note that he is the one with a red ski parka and gray ski pants. The school took the kids to a ski area at the southern end of the Japanese Alps called Naspa. They stayed at the New Otani hotel and skied for three days. It was a fantastic trip and Bailey is quite the accomplished skier between the two trips we took as a family and this one. Sydney does quite well at it also! Her class trip to the snow was just for the day (7am to 5pm!!) and involved snowmen, sledding, a fun lunch and sleeping on the bus-ride home. (Sydney wears a yellow parka and beige ski pants) Her class trip was a little lower-key and involved a full day at an amazing museum of science. My favorite pic is the one of her and her girlfriends. Such diverse girls! Enjoy!
Posted by Aimee Weinstein at 3:53 PM No comments:

“Mom, why are you crying?” Bailey asked with great concern. Bailey and I, along with his father and little sister, were watching a recording of the inauguration of the 44th President of the United States of America, Barak Obama, over our breakfast in Tokyo.
The question was startling in its clarity and simplicity, but the answer was not.
Bailey knew that we were not Obama supporters at the beginning and wondered why cared at all about the inauguration. Marc, luckily, was able to field that question. He explained that the president, after the election is not just president of people who voted for him; he is president of the entire nation and that was the essence of democracy. More people wanted Obama to be their leader than wanted McCain to be their leader so that even the McCain (or Clinton or Huckabee or whomever…) supporters had an obligation to unite and stand behind the current president as a cohesive country. They might hope that their candidate might win next time. And perhaps, even maybe, this president might exceed expectations and earn the support of nay-sayers.

But that wasn’t what moved me, Bailey’s mother, to tears. The four of us as a family have made the choice to live outside of the United States largely for business reasons, though we enjoy the lifestyle of Tokyo very much. But the fact that we live elsewhere makes us no less American than any other person in the country. On this day, one man stood before the entire world and projected an image of hope. Even if Obama had never opened his mouth for that speech, the fact that his face could shine with the possibility of a new day was awe-inspiring.

In the global community in which we live, there are constant debates about the very idea of America – is it still relevant? Is it still a super-power? Are the American people worthy of their place in the world economy with the mess they made with the mortgage crisis? The people around me, Japanese, French, Korean, Finnish, Australian, South African, and others, wonder if America should step aside for the likes of China or India to emerge as the world leader. We debate if the American century is over and how Americans should respond to the other countries vying for its spot in the limelight of the world stage. These are not things that I share with my kids, and indeed it’s just talk amongst friends who are all, at the end of the day, expatriates, living away from their home countries in the bubble of Tokyo.

But with Bailey and Sydney though, I wanted to share my dreams that they, too, might grow up to be president. The thing about America is not its military might or economic prowess. What makes America a great nation and a wonderful place to live is that through hard work, all things are possible. Did Obama have advantages that the average African-American doesn’t have – including a devoted grandmother who sent him to private school? Of course he did, but that just means that he had support; it does not mean that any other person who dreams and is dedicated to a cause could not succeed in the same way.

What I saw and wanted to share with my children is the look on Michelle Obama’s face as she kissed her husband and held her child’s hand. The way she feels today is exactly the same as the way I feel when my husband gives a brilliant speech to colleagues at a conference or when Sydney slides her little hand into mine for safe-keeping. I pointed out to Bailey that the Reverend who gave his benediction after the new president pointed to a land where people care about each other and are guided by the ideals of their forefathers to work toward an ideal of a loving and cooperative community. This was not just a prayer for Obama and the country; this was a prayer for each of us – something we can all relate to.

If you think about it, it is nothing short of miraculous that the most powerful man in the world stepped down and handed the baton over to his successor, making him the new most powerful man in the world today. All of the transition was completed in relative calm with relative peace and with a sense of rightness bestowed on the pomp and circumstance that arises from the traditions of the first inauguration of a new and passionate country in the late 1700’s. The United States was founded on a dream of regular people who wanted to be free to do great things with their lives and for the lives of their children’s children’s children…. And so on.
I was crying, I told my own children finally, because at a time when compassion is a commodity to cherish and a misguided sense of justice often trumps empathy, this one man has the power, for at least one day, to unite us all. He has made me feel everything that is good about America. He has given me hope to pass on to my children. And he has brought the global house down with his message of peace not through wishing and hoping, but via hard work and toil, in the boardroom and on the battlefield and on the purse-strings. Nothing is easy, I tell my kids, and more to the point, nothing worth having comes easily.

So the world might get back to its business tomorrow and the rollup of the sleeves will begin in earnest. But today, Obama supporter or not, we are all American and that is what matters.

“I get it, Mom,” Bailey said after my explanation and a few more tears. I hugged him then, and sent him out the door to school.
Posted by Aimee Weinstein at 3:35 PM No comments: