Cruise from Hong Kong to Taiwan! 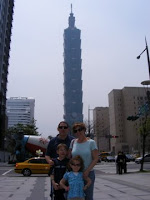 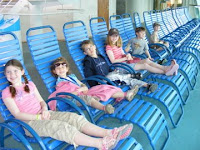 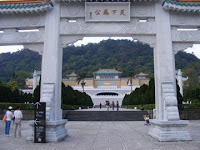 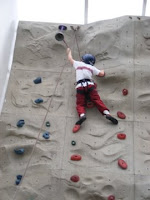 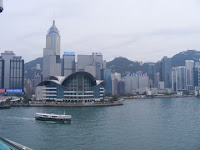 The flight to Hong Kong was merely the tip of the iceberg for a trip that had fun from all angles – kids, adults, rest and sightseeing.

For spring break this year, we decided to take a cruise. I found one that was family-friendly and also good for adults – a Royal Caribbean Cruise. We flew to Hong Kong on Saturday night and spent Sunday morning wandering around Kowloon, the area of Hong Kong across the Harbor from the center of the city. Hong Kong is a pretty typical Asian city except that everyone speaks English. It’s clean, steeped in Chinese tradition, and a slave to modern luxuries. They skyline waves across the atmosphere in a rush of interestingly-shaped buildings.
We were on the ship by about 2pm. Interestingly, they had to keep our passports for customs’ issues and we had to fill out all of the immigration forms for Taiwan ahead of time. Before boarding, we met our friends Kerri and Jeff Dube and their four kids so we could get on together. It was so fun to travel as a group – the kids really enjoyed each other and no one was lonely.

The first thing Bailey was dying to do was try the rock climbing wall, so we did that as the ship weighed anchor. He got to the top over and over again over the next four days. He’s a great athlete. But it was cool to see the skyline of Hong Kong recede from the back of the ship where the wall was located.

The next day and a half was a whirlwind of on-board activities. The kids loved the kids’ club – there was something fun to do for all age groups, so the adults could also enjoy their time. The best part was playing bingo with Kerri – she won the grand prize – and upgrade to the second largest suite on the ship. She is so lucky!

The food was great – we had a fantastic waiter at dinner each night who brought us a ton of things to try as well as everything we actually ordered. My kids ate things like steak, salmon, escargot and a lot of fruit salad. For breakfast and lunch we generally hit the buffet – there was every possible food imaginable – from tuna sandwiches to carved roast beef. There was smoked salmon and bagels for breakfast – boy have we missed that!
On Tuesday morning we docked in the port nearest to Taipei and took a 45 minute bus-ride into the city. Once there we went to the top of the world’s tallest building – Taipei 101. The view was mesmerizing. We could see the entire city! We even got to see the wind dormer – the ball that moves so that the building stays stable in the wind. For lunch we ate in a typical Chinese restaurant. It was delicious! The sauces on the shrimp were savory and the dumplings were larger and more loosely put together than dumplings we’re used to. The fillings for the dumplings were more rice-based than protein based, too.

After lunch we went to the Palace Museum, the best place to see all of the treasures of China. When Chiang Kai Sheck fled Mainland China, he took all of the treasures and art with him. This is his collection. We looked through some of the rooms of the ancient art and then took a stroll through the garden and fed the koi. See the photos! The city itself is nothing to write home about. Having lived in Tokyo for so long already, we have trouble with other Asian Cities. Taipei is dirty and disorganized. The people are nice enough, but they are not overly polite and they stare at foreigners. The museum was just outside the center of the city in what seemed like an oasis of green. Even that was incredibly crowded.

The next day, the port of call was Kaolung, Taiwan, the second biggest port city in the country. We went to the jade market and out for lunch – and then back to the ship – it was a very short port call. The jade market was interesting; we got to hold all of the jade, learn about qualities of jade and then bargain for the items we wanted. It was fun. But this city, too, was dirty and disorganized. The center of the city was nicer than the area of the market, but it was still not great. In the streets, women near restaurants crouched low on the pavement with bowls of soapy water to wash the dishes and utensils used inside. It was very old world juxtaposed with new world.

The funniest part of the second day was that we didn’t take the kids with us into the city. They really wanted to stay on the ship and play in the kids’ club, so we let them. They were happy and we were happy. In addition, they wanted to go to the evening party that night so we let them do that too, and the adults were able to have a drink or whatever until it was time to pick up the children. It was a lovely way to end the cruise.

Back in the port of Hong Kong, we disembarked as quickly as possible and then had dim sum lunch with our friends Samantha and Jonathan Kriegel and their two daughters. We know them from the years we lived in Tokyo before and it was just wonderful to see them. Dim sum is basically a meal comprised of Chinese dumplings. We have had it a number of times in the States and in Japan. There is a lot of pork and shrimp and rice noodles involved. You don’t order off the menu but women with carts of hot food come around to each table and the diners can inspect the food before choosing which dishes they want directly off the tray. It was a fun way to eat.

Hong Kong has this great feature called “in-town check-in.” We were able to go to the in-town airport station and check our bags for our afternoon flight, then go to lunch, and then go out to the airport holding only our carry-ons. Our baggage met us in Tokyo! It was remarkably easy. I wish Tokyo did that – or New York City!!

We had a great trip. I would take a cruise again in a second – it was good for all of us. I hope it’s the first of many trips around Asia over the next five years!
Posted by Aimee Weinstein at 9:55 PM No comments: 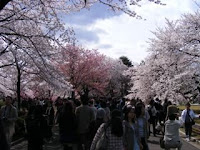 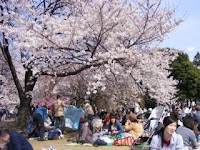 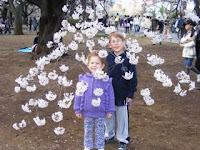 Here are a few pictures of the beautiful cherry trees in Shinjuku Gyoen (park). The custom is to sit under the trees as the blossoms come out and eat and drink and well, watch the trees. Very relaxing. Enjoy!
Posted by Aimee Weinstein at 10:11 PM 1 comment:

After a boring month of regular "life" stuff, I have to share my latest accomplishment.  I rode my bicycle through the city to the new Tokyo American Club (TAC).  (In case I forgot to mention, the TAC razed their building to the ground in January and is rebuilding from scratch - they are in temporary quarters in Takanawa for two years. The new spot is not within walking distance like the old one was.)
Anyway, my friend Amanda-Jane convinced me to try riding there.  I cannot believe I did it. I have been quite scared of riding the city streets.  I only had one near-miss with a child, and otherwise did quite fine.  If I can do this, I can do anything!
Posted by Aimee Weinstein at 8:44 PM No comments: