I kid you not: here's the blurb from the front page of the _Japan Times_ for Saturday, November 22, 2008
Business:
All work, no play
The Japan Business Federation is worried the nation's workers aren't having enough sex and wants it member firms to start so-called family weeks to reverse a declining birthrate.
The article on page 8 of the newspaper, the business section, discusses how the 1632 member-firms of the organization are urging employees to leave by 7pm and get special permission before working on the weekend, all aimed at placing value on families instead of the traditional high value placed on hard work.  They believe that the average employee works so hard during the week that he has no time or energy to have sex and therefore procreate. In 2007, the birthrate in Japan stood at 1.24.  The article goes on to mention that many so-called "salary-men" or white collar workers, used some of the extra time off to arrange extra expeditions to favorite bars they frequent, but others are showing up early at home causing children ask fathers if they are ill.  There is a word in Japanese "karoshi" which literally means death from overwork.  It's an all-too common term.
But hey, I'm all for extra time for more sex!  Go Japan!!
Posted by Aimee Weinstein at 6:44 PM No comments: 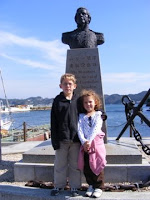 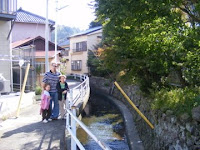 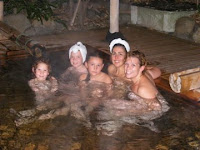 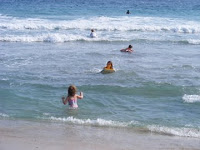 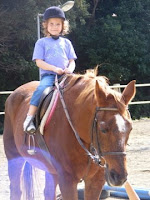 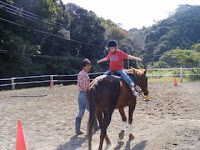 Last week the kids had an autumn break from school and my friend Kerrin invited the kids and me to go with her to her beach house in Shimoda, on the Izu Penninsula, about three hours south of Tokyo.  Shimoda is the official landing spot of the American Admiral Perry who in 1853 landed in his big black ships and demanded that Japan open its doors, which had been closed for over 250 years since the start of the Tokugawa Shogunate, to trade with the west. His arrival brought down the Shogun dynasty and made way for the Meiji Restoration and the re-seating of the emperor.
Marc decided to join us for the weekend, as did Kerrin's husband Steven.  In addition, another family from the kids' school was down there, so all three families had a wonderful time riding horses, going swimming in the Pacific Ocean (yes on November 1 - it was warm!) and just relaxing and enjoying each other's company.  On Friday night we all went into a local onsen, the Japanese hot spring bath.  This is my millionth time going, but the first time that I dared to bring a camera.  On Saturday night all three families had a bar-b-que.  Kerrin is South African and her husband is a Brit. In the other family, the Coppetiers, Adrienne is Austrian and Fredereic is Belgian.  There are some things that transcend culture, though, and one of them is roasting marshmallows.  Everyone knows how to do that!  On Sunday we were able to walk through the town a bit.  Enjoy the photos!
Posted by Aimee Weinstein at 4:57 PM 2 comments: