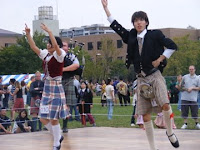 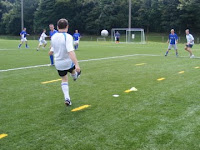 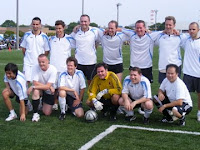 So the main reason we rented a car is to go to the Highland Festival in Makuhari on Sunday.  We could have taken a train, but the car was so much simpler in this case. Run by The Royal Bank of Scotland (RBS) it celebrates Scottish heritage.  One of the main features is a 7-a-side "football" (soccer to most of us...) tournament.  Anyone who wants to can put together a team.  One of our friends took it upon himself to do it.  They called themselves the "Azabu United" and recruited guys from our community.  Marc was one of the younger players.  What does that tell you?  Check out the team photo though - at the last second our French friends Denis and Pravya recruited three young Frenchmen who are studying abroad here in Tokyo.  That brought the average age of the players waaaay down!  Most of the men brought their families too, so the rest of us made up the cheering squad.
The coolest part of the whole thing was the international flavor of the team - French, British, Singaporean, Finnish and American.
The team did well - they won one game and lost two. Perhaps I'm prejudiced, but I think Marc was one of the best players on the field - and one of the most experienced.  But most importantly everyone had fun, and EVERYONE walked off the field under their own steam - they might have been tired, but there weren't any injuries.  Good news!
The festival itself was fun, too.  Bailey mostly watched his dad play soccer, but Sydney played some games and ate fish and chips for lunch.  None of us ate the Hagus.  What is that, anyway?  Check out the photos of the Japanese people in kilts doing the highland dancing.  Pretty wild!
There's no way to express how grateful we are for the life we are living.  Every day seems to bring something new or different.  And sometimes the day brings something familiar - like a soccer game - but gives it a whole different flavor.
Posted by Aimee Weinstein at 1:26 PM

its good to know about it? where did you get that information?

i think you add more info about it.

No haggis for you?? No chopped "meat", spices and barley cooked in sheep stomach? With all the strange things you try in Japan? I'm so ashamed of you, woman! It tastes pretty good, too. Tho' I think the rest of the world calls it "football." It's just us crazy Americans that hafta differentiate. ;) Hugs, Trish