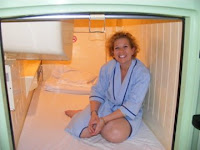 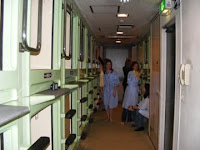 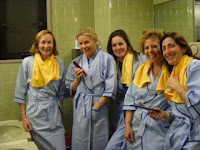 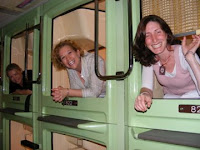 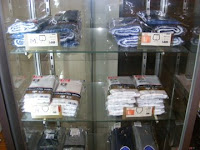 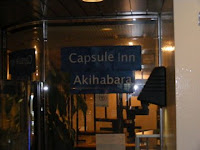 This week a group of intrepid women decided to check out a phenomenon particular to the Japanese culture - the capsule hotel.  The concept of a capsule hotel was originally aimed at Japanese businessmen who work long hours - they could work (read: have dinner, drink, etc.) late into the night.  Most Japanese commute into the city from great distances, sitting on a train for an hour or more twice a day, but in Tokyo, the trains stop before 2am.  So instead of taking expensive cab rides home, the businessmen can check into these "capsules" and sleep for a night before simply heading back to work in the morning. These days enough women use them also that there are women's floors and men's floors.
Simply put, they are stacked beds in boxes, each equipped with a light, a tv, a radio and an alarm clock.  The box has enough room to sit up, and as we learned, five or more of us could fit into it, but in general, it's just a bed.
The eight women met in Roppongi Hills at a cafe for a drink first.  We felt we needed it to shore ourselves up!
We then took the train to Akihabara, the electronics capital of Tokyo and walked to the hotel.  Akihabara is chock full of electronics shops and manufacturers - perfect spot for the capsule.  My friend Nancy had done a little research and this particular capsule hotel had an English sign and website.
The first step as we entered the "genkan" (entryway) of the hotel was to put our shoes in little shoe lockers and hand over the key as we registered at the front desk (no way to get out without paying - you'd have to leave your shoes!)  We then went to the eighth floor where our capsules awaited.
It was simply astounding.  It looked more like a pet-shop kennel than anything else. The walls were lined with boxes ten on the bottom and ten on top.  I had been mildly nervous that it would be more coffin-like, but they were surprisingly comfortable.
Being completely silly girls, we put our clothes and things in the lockers (the locker room was outside of the capsule room) and changed into the Japanese robes - yukata.  We then brushed our teeth with the special toothbrushes provided - each already armed with toothpaste.  (Can you imagine - greatest idea with actual good taste and fluoride to boot!)
What I found interesting was the security.  We had been given a key to a locker and the sleeping room (in which the capsules were housed - we were instructed to keep it locked from both the inside and outside at all times) but each capsule just had a simple shade to shield the guest within.
We took a few photos, laughed a lot and then had a great dinner together before heading home.  I cannot imagine what the proprietor of the hotel thought as we checked out after only a few hours instead of staying all night - crazy tourists!
Yet another adventure to add to the list!
Posted by Aimee Weinstein at 7:59 AM

I was really hoping we would get the story behind the pictures! Love it!!!!!!!!!!! You all looked like you were having a tremendously fun time. Hope all is well. Thinking of you!